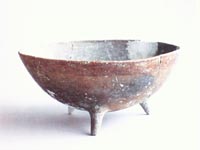 After 20 years of excavation, study and collation, archeologists have made a series of significant breakthroughs regarding the Dadiwan relics of Qin'an, Gansu Province. The associate research fellow of Gansu Culture Relics Research Institute Lang Shude, who took charge of the study, recently told reporters that the Dadiwan artifacts broke six Chinese archeological records. These finds are of great significance in understanding the historical progressions of the Neolithic Age in the Yellow River Valley and the origins of the entire Chinese nation. According to Lang Shude, the report on Dadiwan archeology has recently been completed, passed an appraisal by specialists organized by the State Bureau of Cultural Relics, and is soon to be published. This study will pronounce the Dadiwan relics as "the cultural marvels of the Loess Plateau". The study has been appraised by academic circles as being in the top 100 great archeological discoveries of the 20th century.

The relics, dispersed over an area of 1.1 million square meters, are situated in the valley and on the south bank of the Qingshui River in Wuying village of Qin'an County, eastern Gansu Province.

Up until now, archeologist have found 240 houses, 98 cooking stove ruins, 325 pits and cellars to hold discarded materials, 71 mausoleums, 35 kilns and 12 irrigation canals and ditches, in which a total of 4,147 pieces of pottery, 1,931 stone artifacts (including jade artifacts), 2,218 bone, horn, teeth or mussel artifacts and 17,000 animal skeletons have been unearthed.

The relics of Dadiwan culture can be divided according to five periods: pre-Yangshao culture, the early, middle and late periods of Yangshao culture and early stage of Changshan culture, covering a period of 3,000 years from 6000 BC to 3000 BC. To date, this is thought to be the earliest evidence of Neolithic culture in northwest China.

According to Lang Shude's introduction, evidence of each of the most important aspects in Chinese archeology agriculture, pottery-making, Chinese character writing, construction, and drawing have been found.

Agriculture is represented by the earliest crop specimens of dry farming. The carbonized ji (a kind of ancient millet) specimens, unearthed during the first phase, are contemporaries to those found in Greece. They not only push back the original time of dry land crops in north China, 1,000 years earlier, but also prove that the earliest crops in this area were ji, before su(millet) became popularized. Most archeologists, in the past, found onlysucrop specimens in north China dating back some 7000 years.

The second significant find was of the earliest pottery. More than 200 colorful pottery artifacts including a three-foot earthenware bowl were unearthed during first phase. These are now thought to be the oldest in the country. These 8,000-year-old purplish red pots, although with incomplete patterns, date the skills of colorful Chinese pottery-making back 1,000 years earlier than previously thought.

The third momentous find was of the earliest examples of Chinese characters. The more than 10 kinds of colorful symbols are 1,000 years older than those scored on the pottery of Banpo, Xi'an, Shaanxi Province, which was previously thought to be the earliest illustration. Some of them were almost the same as those found in Banpo. Although these symbols still can't be deciphered, specialists believe they might be the origins of Chinese characters.

The fifth noteworthy find was of the earliest concrete floor in China. The 130-square meter floor of the main room in the palace was made from congealed stone and sand, similar to today's concrete. This, together with the concrete made from pozzolana by the Romans, are the earliest known concrete floors in the world.

The sixth important discovery was of the earliest known drawings in the world. Confirmed by specialists, the drawings done in black, in a room identified as "F411," are the earliest substantive painting revealed to date. This 1.2-meter-long and 1.1-meter-wide, almost perfectly preserved painting has rewritten China's art history, shifting the history of substantive paintings back to some 2,000 years earlier. Researches on the subject show that, before the discovering of this floor painting, the earliest painting was the silk painting from the Chu Kingdom, unearthed in Mawangdui, Changsha, Hunan Province.

To people's surprise, all these "firsts" have been discovered in only 1.34 percent of total area of the Dadiwan site. Lang Shude, who has taken part in the 20-year excavation and study at the Dadiwan site, said, "Dadiwan is a huge treasure trove of ancient culture. We are now only just scratching the surface."