Inscriptions on the oracle bones represent one of the earliest extant forms of writing in China. Recorded in these inscriptions are accounts of important national events and the daily life of the royal household in the late Shang dynasty (about 1300 B.C.) The first discovery of oracle bones was in 1899. During the year 1928 through 1937 nearly 25000 tortoise shells and animal bones were uncovered in an archaeological field at the Hsiao-Tun village in Honan province, China.

The Shang people created shallow pits on the undersides of the shells and bones to facilitate the cracking of the material and the appearance of oracular lines. Inscriptions were then carved on the bones recording the events for which these divinations were sought. Some pieces may be found inscriptions dating about five emperors of the late Shang dynasty. Form those pieces, we found the Stem-Branch characters (ex.

red sheep) were used to record the dates. 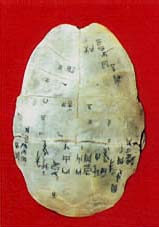 Visit the following sites to get more information about oracle bones.