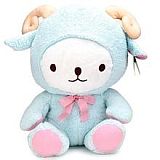 Why don't Chinese want their children born in year of Sheep? This superstition comes from the Chinese Zodiac. Each of twelve animals in the Chinese Zodiac has it virtues and faults. The most favorite animals to Chinese are Dragon, Horse and Tiger. Dragon is a symbol of the emperor. Horse is a symbol of speedy success. Tiger is the king of animal. They are connected to the leadership. Babies born in Dragon, Horse and Tiger have better chance to have an outstanding achievement in their careers.

Sheep is a timid, gentle and shy animal. The negative characteristics of Sheep in Chinese Horoscopes are tender, passive, moody and  indecisive. That implies people born in the Sheep year have less courage to express their opinion and emotion openly. They tend to run away from problem instead of facing and fixing it. They might become a scapegoat someday. Sheep is a sign of the follower. Horse is the best runner on the ground. Horse is a sign of the leader. That is why Chinese parents prefer a Horse baby, instead of a Sheep baby.

Actually, our Chinese Horoscope birth chart is built by the birth year, birth month, birthday and birth hour. You can find your Chinese astrology birth chart from the page of The Secret of Your Life. The birth year animal is only a part of you. In fact, the animal really represents you is the one from the birthday.

The above Chinese astrology birth chat is for a bay born on June 10, 2015. The baby is born in year of the Sheep. In Chinese Horoscope, the Day Column presents the person. Therefore, the baby is Red Fire Snake. It has more Snake's characteristics than Sheep's characteristics. Snake is in the Fire group. Fire is very strong in the birth chart. This baby has very strong personality. It doesn't show negative characteristics of Sheep at all.

The birth year cannot determines people's career, wealth, fame and marriage. There is no reason to believe the sheep superstitions. To prediction people's fortune needs to study the entire horoscope birth chart, not only by the animal in the birth year. When analyzing the Chinese horoscope birth chart, we mainly study the relationships between Five Elements, not by zodiac animals.

Mick Jagger and Barry Manilow were born in 1943, year of Water Sheep.

Kate Hudson and Jennifer Love Hewitt were born in 1979, year of Earth Sheep.