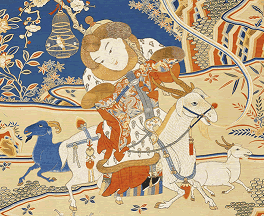 2015 is the year of Sheep. Some people say 2015 is a Green Sheep or Wooden Sheep year. This is because the Stem-Branch Calendar is connected to the Five Element theory. Chinese calendars used the Stem-Branch system to count the days, months and years. There are 10 Stems and 12 Branches in this system. Stems are named by the Yin-Yang and Five Elements (Metal, Water, Wood, Fire and Earth). The Stem sequence order is Yang Wood, Yin Wood, Yang Fire, Yin Fire, Yang Earth, Yin Earth, Yang Metal, Yin Metal, Yang Water and Yin Water. Branches use animal names. The Branch sequence order is Rat, Cow, Tiger, Rabbit, Dragon, Snake, Horse, Sheep, Monkey, Chicken, Dog and Pig. Stem and Branch are used together to form a cycle of 60 counting systems which begin with Wooden Rat and end with Water Pig. You can see the entire sequence from the Chinese New Year's page. From 1924 to 1983 is a complete cycle. Year 2015 is Female Wood Sheep the 32nd of the Stem-Branch in the system. Because Wood is connected to Tree or Green in the Five-Element system, Year 2015 is also called the Green Sheep year.

A Sheep is a farmland animal. Sheep are herbivores and like to eat grass. Therefore, Sheep contains Earth and Wood in the Chinese Five Element theory. The Sheep hour of Chinese Horoscopes is from 1 P.M. to 3 P.M. The ground has absorbed lots of heat at noon. July is connected to Sheep. July is still summer. Therefore, Sheep also contains Fire. Some Chinese eat lamb during the winter in order to keep warm.

Sheep is one of Chinese lucky animals. Sheep doesn't have to do the farm work. Instead, all the farmland jobs go to the Ox. Therefore, Ox doesn't like Sheep. Sheep have freedom to look for any kind of grass. They never worry about running out of grass. They have mild personalities and are friendly to humans. Chinese treat Sheep as an auspicious animal.

San-Yang-Kai-Tai is from I Ching, which is the most profound foundation of Chinese philosophy. It states the natural phenomena of our universe, then applies it on people relationships in the family, organization, government and the nation. The nature rule of the universe (Dao) is Yin and Yang.  I Ching uses the symbol of broken bar as Yin and the solid bar as Yang. Yin is female, cold, earth or down. Yang is male, hot, sky or up.

In the morning, sky is hot and ground is still cold; the Little Yang

is assigned. At noon, sky and ground are hot, which is Big Yang

. In the evening, sky is cold and ground is still hot, which is Little Yin

. At night, both sky and ground are cold, which is

is Big Yin. Human live between sky and ground. By adding the human layer with Yin and Yang on those four symbols, they become Eight Trigrams (Ba Kua), which are

Earth. These are natural phenomena in human's eyes. Combining these two trigrams together, they become I Ching 64 Hexagrams.

Earth-Sky, which contains the meaning of peace, harmony and good fortune. The time is in the Tiger Month, which starts around on February 4th of each year. Chinese Lunar New Year is usually near the beginning date of Tiger month.

The Snake month is full of Yang. The Horse Month has five Yang. Sheep Month has four Yang. Yang is hot. In Chinese astrology, Snake, Horse and Sheep are in the Fire cycle. The Sheep is the last year of Fire cycle. 2016 will be Monkey Year, which is the Metal cycle. Therefore, 2015 is the turning point year. We need to review what we gained and lost in the past two years. In 2015, we need to prepare a new plan for 2016. More I-Ching interpretation...

To forecast our luck in the coming years, we first need to know what elements and animals are in our Birth Chart from the Find Your Lucky Element page. 2015 is the year of Female Wood Sheep. Sheep mainly contains Earth. It also contains Wood. Therefore, 2015 is a strong Wood year. Sheep is the year after Horse Fire year. Sheep still contains some Fire. Wood can help Fire to burn. So Fire of 2015 is still strong. Therefore, the Earth, Wood and Fire are the key factors to determine people's fortune in 2015.

How to Pinpoint to the Lucky Days

People are always want to know which days their luck will come. To determine the coming of good luck, we need to study the Stems and Branches relationships among Daily, Monthly, Yearly, Current Major Cycles and the Birth Chart.

There is an easy and simple way to find your really lucky day. First, the current Year must mainly contain your Lucky Element. Next, you look for the Month that mostly contains your Lucky Element in the Stem and Branch systems. After this, look for days that will contain majority of your Lucky Element. The theory is that the Year brings Lucky Element into the Month; the Month gathers the energy of the Lucky Element and the Day triggers the luck to come out. To find the Five Elements on certain months or dates, click on the following links. The easiest way to learn more about your lucky Elements and days is from the Chinese Fortune Angel astrology software.

More detailed information is available in the

used in the astrology calendar means hazy sun or afternoon (the sun on the western side of the sky), not sheep. The traditional Chinese character of the sheep is Yang

. There is no good explanation for why ancient Chinese selected Sheep as the nickname of Wei. The Chinese astrology theory explains the life cycle using the cycle of the tree. Wei is the cycle of fruit becoming tasty at the end of summer. Fruit will become ripe in the autumn.

is at Chinese Pictographic Characters - Sheep

The Most Compatible Birthdays