2012 is Year of the Dragon and it will arrive on February 4, 2012. (Note: Chinese New Year Day is on January 23, 2012. The first day of 2012 Chinese Astrology Year is on February 4, 2012.) Many people must be eager to know if they will have better luck in the coming year than previous years. Here, we want to use Chinese Astrology Five Elements (Metal, Water, Wood, Fire and Earth) theory to explain people's fortune in 2012 and foresee what will be happening to them in the year of the Dragon.

According to Chinese Five Element Astrology Calendar, 2012 is the Year of Water Dragon

. The color of Water in Five Elements system is related to Black. Therefore we can say 2012 is a Black Dragon, Water Dragon or Black Water Dragon year. 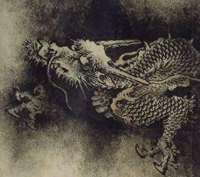 Chinese Astrology is a Balance Theory of Five Elements. Each animal can be converted into Five Elements. Dragon contains Earth, Water and Wood. It's a source of Water and It is also called the Water Dam in Chinese astrology. Since Water

of 2012 comes with Dragon. it implied Water from the sky makes a dam overflow. Therefore 2012 is a strong Wateryear.

Dragon is a legendary animal and it is symbol of emperor in China. Since the Dragon is coated with mysterious color, Chinese consider that the dragon is unpredictable, untouchable and people cannot see its head and tail at the same time. Therefore, we can might see something unexpected happening in 2012. Also a person with too many dragons in the Chinese astrology birth chart will become smarter, sly and unpredictable in the coming year.

Before predicting your luck in 2012, you have to know what Type of Element you are and what your Lucky Element is from your astrology birth chart. The Lucky Element is the major factor to determine people's fortune. 2012 is the Year of Black Water Dragon, which contains Earth, Water and Wood. If your Lucky Element is Earth, Water or Wood, then 2012 will bring you some degree of luck. Since 2012 is Water Dragon, people whose lucky element is Water will benefit more in 2012. Fire is the opposite element of Water. People whose lucky element is Fire will have more impact in 2012.

For more details and an accurate prediction, the first step to knowing your fortune is know what animals are in your birth chart. You can find that information from the Chinese Astrology Lucky Element page using your birthday and birth time.

The following is the example of the Chinese Astrology Birth Chart.

2012 is Male Water Dragon year. Dragon contains Earth, Water and Wood. Dragon and Rat in the Year Column have attraction relationship into Water. That means Water is pretty strong in 2012. Day Master Fire is afraid of Water. Water brings the pressure on the Day Master Fire. This baby is about 4 years old. Therefore, it should be watched for the health.

Water is also related to jobs and/or career. If this person was born on June 30, 1948, then this person should have a good career opportunity in 2012. However, Male Water of 2012 and Day Master Fire have a fighting relationship. Also, Dragon and the Dog in the Day Column have another fighting relationship. This implies a family, health or marriage issue will appear in 2012.

2012 is the Water Dragon year. Dragon contains Earth. People whose Earth score is low will receive benefits from Dragon. Dragon also contains Water. 2012 will bring good luck for people whose Lucky Element is Water. Dragon is the last year of the Wood cycle. Dragon carries the Wood energy from Rabbit of 2011. If you did very well in 2011 and your Lucky Element is Wood, then your luck will most likely continue during the year of Dragon.

The following table shows people's luck in 2012 based on their Luck Element.

The following table tells people's what event might happen in 2012 based on their Day Master Element Type. Day Master is the upper row symbol in the Day Column of the Birth Chart.

, then your social relationship with people will be good. If Female Fire is your Day Master and you are a female, then it's possible that a love relationship, engagement or marriage will come to you in 2012.

have a Stem Attraction Relationship into Wood. Dragon also contains Wood, therefore, if Wood is your lucky element, then 2012 will be a very good year to you.

have a Branch Attraction Relationship into Metal. If Chicken is in your birth chart, then your people relationship will be good. If Metal is also your lucky element, then you will do well in social activities. Chicken is also the Romantic Star of Dragon. If you are looking for love, then you will have a very good opportunity to find someone you like. If you already have a lover, then we will have a closer relationship. If Chicken is in the Day Column of the birth chart, then you might think about marriage in 2012.

are in the birth chart, then they will gather and enforce the strength of Wood. Because Water of 2012 is the supporting element of Wood, people with lucky element Wood can receive the benefit from Water Dragon. If Tiger

also appears in the birth chart or current 10-Year Major Cycle, then the three of them form the strongest Wood combination. That means this will be a wonderful year for people whose luck element is Wood. The best month of the year will be the Tiger month and Rabbit month.

are in the birth chart, then they will join with Dragon

to form a very powerful Water combination. That means Water lucky element people will have a big surprise year. If Water represents your Money Star, then you will see your wealth grow in 2012. But if Water is the unlucky element, then watch your money, otherwise the debt will be waiting for you.

Dragon is also called Water Dam in the Chinese astrology. If only Rat

appears in the birth chart of current 10-year Major Cycle without Monkey, then

are still can build a strong Water. People whose Lucky Element is Water can expect good people relationships and good luck in 2012, especially in the month of Monkey, which is in August.

have a Fighting Relationship, which implies poor people relationship. If the Male Fire Dog

in the Year Column or Day Column of the birth chart, then this is the case of a Double Stem-Branch Fighting Relationship. This is a bad sign of instability, accident, separation, dispute, hostility and poor health. These type of people should use a conservative attitude and approach to avoid any dispute, quarrel and challenges in 2012.

is the Travel Star to Dragon

. People whose birth chart contains a Tiger may wish for outdoor activities, either for business trips or for a long distant vacation. It also implies something will keep turning your mind around.

, they have a Self-Hurting Relationship, which can disturb people's emotions, judgment, and decision. People might become suspicious and stubborn. When things go wrong, then they will blame themselves. Traditionally, Double Dragons (one dragon in the Year Column or Day Column of the birth chart, one in year 2012) is a bad sign for their yearly luck. This is because the Chinese dragon is untouchable and unpredictable. A person with too many dragons is unpredictable too and becomes somewhat sly. If the forecast is unpredictable, then it won't be a good year.

However, according to Chinese Five Element astrology, Double Dragons should form a strong Earth. Earth implies steadiness or stillness. Earth people minds are kind of inflexible. They always have the basic instinct to keep their promise. If Earth is their Lucky Element, then Earth people should do well in 2012.