Some web sites say the year 2012 is the 4710th Chinese year. If you cannot find the explanation as to why, here is a possible answer for you. The Yellow King's inauguration was held in the spring of 2697 B.C. But the day that was used as the first day of the year was the winter solstice, which was around December 23rd, 2698 B.C. Today's January 1st meant nothing to the Yellow King. If we count that extra eight days in 2698 B.C., then year 2012 is the 4710th Chinese year.

2012 is the year of Dragon. Some people say 2012 is a Black Dragon or Water Dragon year. This is because the Stem-Branch Calendar is connected to the Five Element theory. Chinese calendars used the Stem-Branch system to count the days, months and years. There are 10 Stems and 12 Branches in this system. Stems are named by the Yin-Yang and Five Elements (Metal, Water, Wood, Fire and Earth). The Stem sequence order is

The Branch sequence order is

Rat, Cow, Tiger, Rabbit, Dragon, Snake, Horse, Sheep, Monkey, Chicken, Dog and Pig. Stem and Branch are used together to form a cycle of 60 counting systems which begin with

Wooden Rat and end with

Water Pig. You can see the entire sequence from the Chinese New Year's page. From 1924 to 1983 is a complete cycle. Year 2012 is Male Water Dragon

the 29th of the Stem-Branch in the system. Because Water is connected to Black in the Five-Element system, Year 2012 is also called the Black Dragon year.

A dragon is a legendary creature. All legendary stories about Chinese dragons are from the sky, which means heaven in China. The image of dragon is blurred, misty, mystic, occulted, noble and untouchable. For China, it is the symbol of power from heaven. The Chinese emperor was considered the son of heaven. An emperor has the authority to send command to Dragons. One Chinese story mentioned an emperor killed a dragon in his dream. After 581 AD, Chinese emperors began to wear imperial robes with dragon symbols. During the Ching Dynasty (1644-1911 AD), the dragon can be seen everywhere on the roofs, doors, pillars, bridges, utensils in the forbidden city. The most powerful dragon is the five-clawed dragon. It appears only on the yellow imperial robe. Because of this, Dragon is one of most auspicious animals in China.

They say that Dragon has nine sons. People didn't know too much about the Nine Dragons until Ming Dynasty (1368-1644 AD). However, there is more than one version of the Nine Dragons story. One story is the following.

The Dragon sent its nine sons to help the first emperor of Ming Dynasty to conquer China. After completing the mission, nine dragons were preparing their journey to return to heaven. But the emperor wanted them to continue to help the Ming Dynasty. The nine dragons wouldn't stay and the emperor couldn't stop them. However, the emperor decided to play a trick on the most powerful dragon, the 6th son. He tricked the sixth dragon son to carry a magic stele with a carved inscription, which could suppress any ghost, spirit or evil creature. The 6th dragon couldn't move under the magic stele, and all of his other brothers wouldn't leave without him. However, they wouldn't work for the emperor anymore. They decided to no longer show their dragon identities and turned themselves into evil creatures. Since then, the nine dragons have stayed in China.

The above picture shows Number 6 Son Under the stele 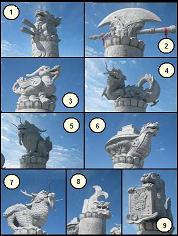 There is a famous peerless Nine Dragons Painting by Chen Rong from the Sung Dynasty (1127-1279). Nine is the highest digit and stands for top rank. Nine is also related to the sky in I-Ching. That's why the imperial robes of Ching Dynasty have nine dragons on it. 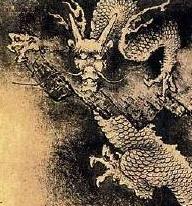 There are nine dragons engraved on the wall and ground in the Forbidden City in Beijing, the imperial palace of Ching Dynasty. The yellow imperial robes are weaved with nine dragons. Therefore, 9 must means something special in China. Nine (9) represents a powerful number is from I-Ching.

The I-Ching is the foundation of Chinese Yin Yang philosophy It was inspired from the River Diagram and Lo Shu. I-Ching is the oldest oracle tool in China, and is used by interpreting the changes of natural phenomena of our universe. The system of I-Ching uses 64 hexagrams to make predictions. The fist Hexagram is

contains the information about Dragon philosophy of I-Ching.

Click here for more information about Dragon Philosophy of I-Ching ...

the Astrological Year of Dragon begins on February 4, 2012

To forecast our luck in the coming years, we first have to know what elements and animals are in our Birth Chart from Find Your Lucky Element page. 2012 is the year of

Dragon is a stranger to Dog. When Dog meets Dragon, Dog will bark and prepare for fighting. Dragon is kind of lonely. It's hard for other animals to build love or romantic relationship with Dragon.

The complete Chinese Five Element Astrology is at Chinese Astrology 2012 for The Year of Black Dragon.

How to Pinpoint to the Lucky Days

People are always want to know which days their luck will come. To determine the coming of good luck, we need to study the Stems and Branches relationships among Daily, Monthly, Yearly, Current Major Cycles and the Birth Chart.

There is an easy and simple way to find your really lucky day. First, the current Year must mainly contain your Lucky Element. Next, you look for the Month that mostly contains your Lucky Element in the Stem and Branch systems. After this, look for days that will contain majority of your Lucky Element. The theory is that Year brings Lucky Element into the Month; Month gathers the energy of Lucky Element and Day triggers the luck out. To find the Five Elements on certain months or dates, click on the following links. The easiest way to learn more about your lucky Elements and days is from the Chinese Fortune Angel astrology software.

What Will Happen To You? Any Money Luck?

You are welcome to visit our site daily. We recommend that you come to check your fortune every month.

The Cycle of Sow and Reap When things go wrong, you must know the astrology cycle and prepare for the next lucky days.

How to Prepare Chinese New Year in USA