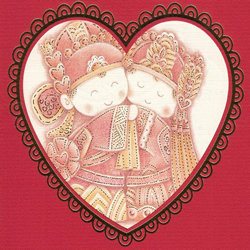 Qi means night. Another name using in the Chinese history is The Daughter's Festival, which is the day for unmarried young girls looking for love.

A love story for this day is about the 7th daughter of Emperor of Heaven and an orphaned cowherd. The 7th princess was good at weaving fabric on a loom. She and her sisters liked to visit the Earth. The ox owned by the orphan young boy knew the secret of the princesses. He married the 7th princess by the ox's instructions. Later, they were separated by the Emperor. The 7th daughter was forced to move to the star Vega and the cowherd moved to the star Altair. They are allowed to meet only once a year on the day of 7th day of 7th lunar month. More detailed information is at the story of Chinese Valentine's Day.

The Stars of Weaving Maid and Cowherd

The star Vega (Weaving Maid) is the 5th brightest star in the sky. Therefore, it's quite easy to find on a summer night. The size of Vega is 16 times bigger than the Sun. The temperature on its surface is more than 10,000 degrees. The brightness of Vega is 25 times brighter than the Sun. It's 25 light-years away from the Earth.

The star Altair (Cowherd) is the 11th brightest star in the sky. Therefore, it's not difficult to find at the summer night. The size of the Altair is four times bigger than the Sun. The temperature on its surface is about 8,000 degrees. The brightness of Altair is 11 times brighter than the Sun. It's 17 light-years away from the Earth.

Enlarge the picture, Read the story
Star Sky by Two Steps from Hell

Here we are riding the sky, painting the night with sun. You and I, mirrors of light, Twin flames of fire, lit in another time and place.

I knew your name, I knew your face, your love and grace. Past and present now embrace worlds collide in inner space...

There are two stars, Alshain and Tarazed, next to the Altair. They said those two stars on Altair's two sides are the Cowherd's two children in the story of Chinese Valentine's Day. The distance between the Vega and the Altair is 16 light-years. They cannot meet in the sky, as they are too far apart. In the story, there was a magpie's bridge for Weaving Maid and Cowherd to meet. Do you know the length of that bridge? Please watch the Star Vega & Star Altair with swan constellation in the sky.

The Festival of Chinese Valentine's Day

On Chinese Valentine's Day, people in love like to go to the temple of Matchmaker and pray for their love and the possible marriage in China. People still single will do the same thing to ask their luck of love in the Matchmaker temple.

The Chinese Valentine's Day is also called The Daughter's Festival. Long ago, Chinese girls always wanted to train themselves to have good handcrafting skills like the Weaving Maid. The skill is essential for their future family. On that night, the unmarried girls may pray for the Weaving Maid star to become smarter. Girls can do a test by putting a needle on the water surface when the star Vega is high up in the sky. If the needle doesn't sink, the girl is already smart enough and ready to find a husband. Girls may ask for any wish, but only one per year.

In some Chinese provinces, people believe that decorating the flowers on the ox's horn on the Chinese Valentine's Day enables to prevent disaster. On the night of Valentine's Day, women wash their hair to give it a fresh and shiny outlook. Children wash their faces the next morning of Valentine's Day using the overnight water in their backyards to have a much more naturally beautiful appearance. Girls throw the five-color ropes, made at Chinese Dragon Boat festival, on the roof for magpies. Magpies will carry ropes to build the bridge.

The Most Compatible Birthdays For You