The I-Ching is the foundation of Chinese Yin Yang philosophy. It describes the changes of natural phenomena of our universe. Then it derives this philosophy into oracle. The Chinese characters of I-Ching are

. The second character means a book, a profound book. The first character means ease or change. Therefore, some people call it as "The Book of Ease" or "The Book of Changes".   I-Ching philosophy was invented by Fu Xi (around 2900 B.C.) before Yellow King's China was born (2697 B.C.). I-Ching is the oldest oracle tool in China. The concepts of Yin Yang and Season changes of Chinese astrology are all from I-Ching. Now, I-Ching's theory has prevailed worldwide for thousand of years.

to stand for Yang (Sky) and a broken bar

to stand for Yin (Earth). A set of three bars becomes a Trigram. The total combination of Trigrams is 8. They are

Chinese call 8 Trigrams as Pa Kua or Ba Guo. Later I-Ching developed into 64 Hexagrams, which are formed by double Trigrams. 64 Hexagrams are 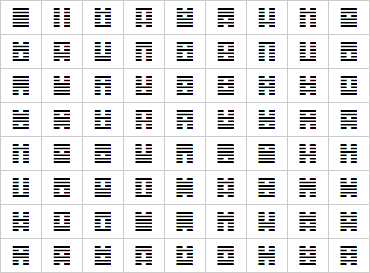 The Dragon is a legendary creature. It is a triphibious animal. It can survive on the ground, in the water, and in the sky. People view the dragon as mystic, cloudy, misty, blurred and unreachable. Because Dragon can travel in the sky, it is connected to heaven in China. Many Chinese emperors wore imperial robes with dragon symbols. Thus, Dragon is also the icon of power.

King Wen (11052-1056 BC) invented 64 hexagrams in a fixed order during his 7-year jail time. He applied the I-Ching theory to catch the opportunity to escape. Later his son conquered the China and built the Chou Dynasty. His 64 hexagrams sequence is called King Wen sequence (文王卦序).

In Ching Dynasty (1644-1911 AD), the emperor's yellow imperial robes are weaved with nine dragons. This is because the number 9 is the most strongest in Yang (power) and Number 6 is the most weak in Yin. You can find Old Yang and Old Yin information in the pages of the River Diagram and Lo Shu. Therefore the Yang solid bar

Chien) together. That's a sign of Sky over Sky.

The hexagram sequence is from the bottom to the top. The level 1 is Yang. Since 9 can represents Yang, we can call level 1 as Nine 1. This hexagram are all Yang. Therefore, we can call all levels as Nine 1, Nine 2, Nine 3, Nine 4, Nine 5 and Nine 6.

This is lowest level of Yang. The energy of Yang is just developing. It's like a young baby dragon and is unable to handle anything. In this situation, dragon needs to hide itself and to not take any action. If the dragon wants to be active, jump around, and show off, then that's a sign of danger. That means you will fail, if you take action during this time.

The Yang energy is growing. Dragon grows up a little bit and appears on the ground. Now people around can see you. That's a sign of hope. However, level 2 is even number, which is Yin. That implies Dragon is not in a right position. Dragon is still young and needs to learn more. The best way is to ask advice from mentors. If you do your own way, you won't get the support you need and you won't succeed in reaching your goal. During this time, it is best for the dragon to look for help and support.

The Dragon climbs up to a higher position. Level 3 is Yang is a right position for the dragon. Now Dragon becomes stronger and smarter. More people will pay attention to the Dragon. However Dragon becomes a target, and thus, Dragon is in a dangerous spot. If the Dragon makes any mistakes, he will be attacked by many competitors. Therefore Dragon needs to be alert and work harder to complete and survive. Level 2 Field Dragon won't compete with others. The status of Level 3 Diligent and Vigilant Dragon is riskier, because the enemy is around.

Level 4 Jumping Dragon has jumped out of danger. Now Dragon is even stronger and ready to take off. However, Level 4 is a Yin position. That means something is out there still against you. Dragon just has to wait for the opportunity to jump higher. Dragon must stay alert and measure the situation. It's OK to try for multiple jumps. A Jumping Dragon is like a person with lots of knowledge and skill, has ability to handle many positions, and waits for a better opportunity for his or her future. However, in order to prevent from any mistakes, people need to pay attention in all aspects. Otherwise, there is no chance to take off.

Dragon moves up to highest Yang position. Finally, Dragon is flying in the sky. Dragon can enjoy unlimited space of sky and power of potential. Now Dragon is on the top position and has many people under it. It's the time to meet people and look for the assistants, advisors, leaders to solidify the territory and make its reign stronger. This is a sign connected to the emperor or president. The term of The veneration of Nine Five in China means the person holds the highest rank position in an organization. The person has reputation, wealth and power at the same time. Therefore, this is a sign of success and victory.

When Dragon flies to even higher position, it will find there is no more room up there. Dragon cannot fly higher and won't fly lower. Level 6 is a Yin position, that means Dragon arrives at the wrong position. Dragon will regret reaching this position. This only way is to discipline itself. If Dragon is too greedy and looks for more satisfaction, then Dragon will make mistakes and step into a dangerous situation. Therefore, the highest position is not the best. Flying Dragon at level 5 has more to enjoy than Regretful Dragon.

This is the first hexagram. The hexagram contains all Yang. This implies creation, aggressiveness, stubborn, powerful strength, unlimited energy or endless recycling, This is a sign of many dragons. If there is no competitor in the group, this is a good and peaceful sign. The attitude of conceitedness, waywardness or impetuosity will bring trouble. People need a cool, objective, flexible mind and attitude to reach their goal. Therefore Chien-Sky Hexagram is a good sign and an unlucky sign as well.