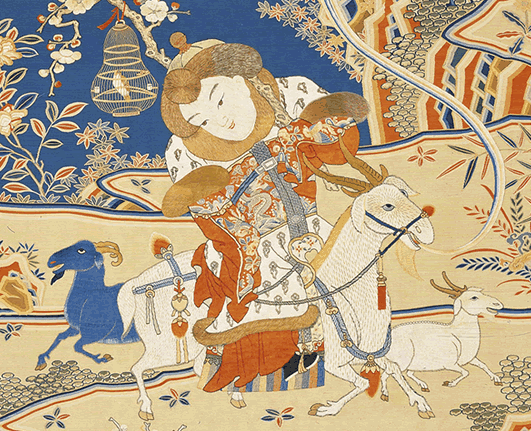 The Year 2015 is the 4712th Chinese year. The 2015 Chinese New Year Day is on February 19, 2015 in China's time zone. This day is a new moon day, and is the first day of the first Chinese lunar month in the Chinese Lunar Calendar system.

According to Chinese Astrology, the Year 2015 is the Green Wood Sheep year. The first day of the Sheep year is on February 4, 2015. This day is different from Chinese New Year Day, because Chinese Astrology calendar is not a simple Chinese Lunar calendar.

, which means "Three Goats Start Fortune". Actually the term is from

are pronounced as Yang.

is Male and is the word from

San-Yang-Kai-Tai is from I Ching, which is the most profound foundation of Chinese philosophy. It states the natural phenomena of our universe, then applies it on people relationships in the family, organization, government and the nation. The nature rule of the universe (Dao) is Yin and Yang.  I Ching uses the symbol of broken bar

as Yin and the solid bar

as Yang. Yin is female, cold, earth or down. Yang is male, hot, sky or up. In the morning, sky is hot and ground is still cold, which is the Little Yang

is assigned. At noon, sky and ground are hot, which is Big Yang

. In the evening, sky is cold and ground is still hot, which is Little Yin

. At night, both sky and ground are cold, which is

is Big Yin. Human live between sky and ground. By adding a human layer with Yin and Yang on those four symbols, they become Eight Trigrams (Ba Kua), which are

Earth-Sky, which contains the meaning of peace, harmony and good fortune. The time is in Tiger Month, which starts around on February 4 each year. Chinese Lunar New Year usually is near on beginning date of Tiger month.

The Snake month is full of Yang. The Horse Month has five Yang. Sheep Month has four Yang. Yang is hot. In Chinese astrology, Snake, Horse and Sheep are in the Fire cycle. The Sheep is the last year of Fire cycle. 2016 will be Monkey Year, which is the Metal cycle. Therefore, 2015 is the turning point year. We need to review what we gained and lost in the past two years. In 2015, we need to prepare a new plan for 2016.

Therefore, the advice from Sheep is that one step back is for preparing two step forward.

What is Yin Yang?