Legendary Stories of the Moon Festival and Moon Cake

In China, "Moon is extraordinary full during Mid-Autumn" has been told from generation to generation. Some people wonder the moon of the Chinese Moon Festival is always a Super Full Moon, which is a Supermoon appears on the Full Moon day. This full moon will be extraordinary brighter, bigger and fuller. 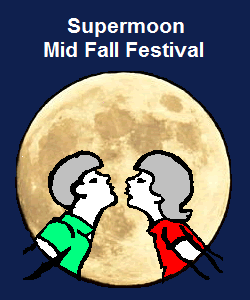 Firstly, we need to know what Supermoon is. The "Supermoon" is not an astronomical term. It's from modern astrology. Astrologer Richard Nolle defined a new or full moon which occurs with the moon at or near (within 90% of) its closest approach to Earth. Here, we interest only in Full Moon.

Supermoon is related to the distance between Earth and Moon. The average distance from Earth to Moon is 382,500 kilometers (237,700 miles). There is no simple formula to determine the Supermoon. In order to memorize easily the number some people adopt this way. If a full moon is closer than 360,000 kilometers (223,694 miles), it is considered a Supermoon. There are more than one Supermoons in a year.

People always interest in the largest moon. So the closest Supermoon of the year becomes the Super Full Moon.
The following are Supper Full Moon dates. All dates are calculated by Universal time (UTC).

The date of Chinese Moon Festival is the 15th moon day of 8th Chinese lunar month (Chicken month). The new moon day is the first day of a Chinese Lunar Month. Since the first day of 8th lunar month is 08-25-2014 in China time zone, therefore, the Moon Festival is on 09-08-2014. But August 9.2014 is not a Full Moon date. August 10, 2014 is the Full Moon date. That means the moon of August 10 is a Supermoon and will be larger than in the night of Chinese Moon Festival.