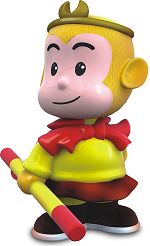 2016 is the year of Monkey. Some people say 2016 is a Red Monkey or Fire Monkey year. This is because the Stem-Branch Calendar is connected to the Five Element theory. Chinese calendars used the Stem-Branch system to count the days, months and years. There are 10 Stems and 12 Branches in this system. Stems are named by the Yin-Yang and Five Elements (Metal, Water, Wood, Fire and Earth).

The Stem sequence order is Yang Wood, Yin Wood, Yang Fire, Yin Fire, Yang Earth, Yin Earth, Yang Metal, Yin Metal, Yang Water and Yin Water. Branches use animal names. The Branch sequence order is Rat, Cow, Tiger, Rabbit, Dragon, Snake, Horse, Sheep, Monkey, Chicken, Dog and Pig. Stem and Branch are used together to form a cycle of 60 counting systems which begin with Wooden Rat and end with Water Pig. You can see the entire sequence from the Chinese New Year's page. From 1924 to 1983 is a complete cycle. Year 2016 is Male Fire Monkey the 33rd of the Stem-Branch in the system. Because Fire is connected to Red in the Five-Element system, Year 2016 is also called the Red Monkey year.

Monkey King - Journey to the West

When it comes to the monkey, Chinese immediately think about the Sun Wu-Kong, the Monkey King. On February 8. 2016, Chinese New Year Day, the movie of The Monkey King 2 will be released in China. This movie is a sequel to 2014 Monkey King.

Monkey King is a main character in the Chinese classical novel Journey to the West. Monkey King was born from a stone and acquired supernatural powers from a Taoist master. It's very naughty, went to heaven, stole an elixir of life, ate many peaches of longevity, and then rebelled against heaven. All guardians or generals of heaven cannot conquer the monkey. Finally Buddha tamed and jailed it in the bottom of Five-Element mountain. The monkey had to wait Master Xuan-Zang monk for 500 years to rescue it. Then the story of Journey to the West began. The monkey had to escort the master monk to bring Buddhist sutras from India to China. At the time of the journey, the stone monkey was about 850 years old.

The story of Journey to the West is based on the true story of the Buddhist monk Xuan-Zang (602–664) of Tang Dynasty who traveled alone to India for the original scriptures of Buddha’s teachings. The novel was originally published anonymously in the 1590s during the Ming Dynasty. Later Chinese accepted Wu Cheng-En (1506–1582) as the author. The Journey of the West contains strong colors of Chinese mythology, Confucianism, Taoism, and Buddhism. It's a novel for all ages to learn Chinese culture.

The name of Sun Wu-Kong was given by its Taoist teacher who taught it the immortal and magic powers. The last name means grandchild in Chinese. The first name is awareness and is vacuity. The monkey learned 72 different body transformations into animals or objects. It can duplicate itself using his hairs. It can travel on the cloud as the transportation. It can jump 108000 Chinese miles (54000 km) away just turn a somersault. It has x-ray eyes and can can see through any disguise or transformation of demons. Its ears can hear the voices from miles away. It can shrink its body and transform as a small flying animal. So it can get into the demon's body.

The weapon of Monkey King is a golden staff, which was a post of the palace of Dragon Kingdom in the ocean. The post weights about 8100 kg. It can grow as tall as you want or shrink to the size of a needle. It's very heavy and Monkey King keeps it in its ear.

The story of Monkey King or Journey to the West has been adapted for TV drama, movies, cartoons and opera so many times. To understand the icon of Monkey King in Chinese mind is to watch the Beijing Opera of Monkey King.

There is another in Japan. It's pronounced as Son Goku, which is the protagonist in the Dragon Ball manga and anime series. The first manga was published in 1984. The new Dragon Ball Super anime was just released in 2015.

Dragon Ball is a superhero story. The beginning story is similar to superman story, an infant boy was found in the woods by an old man. The baby arrived by a crash-landing spaceship from Planet Vegeta. (Vegetables) The boy had a monkey tail, he was named Son Goku. Since Goku character was inspired by Chinese Monkey King, the personality in the early age is similar to Sun Wu Kong.

In the Dragon Ball story, the person who collects seven dragon balls can summon the Magic Dragon out and ask for three wishes. One popular wish is to bring a dead person back to the life. That's one of the reasons to keep story going for three decades.

Son Guku is Saiyan (veggie people) of Planet Vegeta. He has his family on the Earth. Now he is a great-great-grandfather. All his hybrid descendents have monkey tails. They have ability to transform to Super Saiyan.

Goku is always underdog facing the new opponent. He is extremely determined to push himself beyond his limitations and never give up even when the odd is near to zero. Because Saipan will become stronger after recovering from injury. So Goku can win the victory in the end. Dragon Ball anime is very creative to express the strength of the energy. The total of episodes is around 700. It takes time to watch all.

To forecast our luck in the coming years, we first need to know what elements and animals are in our Birth Chart from the Find Your Lucky Element page. 2016 is the year of Male Fire Monkey.

Monkey is the 9th animal of 12 zodiac signs. This is the beginning of the Metal cycle. If you do well in the 2016 Monkey Year, then your luck will continue during 2017 Chicken Year.

Monkey mainly contains Metal. It also contains Water. Metal is connected to gold. Water is connected to wisdom and danger. Therefore, we will deal with more financial events in the year of the Monkey. Monkey is a smart, naughty and vigilant animal. If you are looking for financial success, then you need to outsmart the Monkey.

More detailed information is available in the

The Most Compatible Birthdays