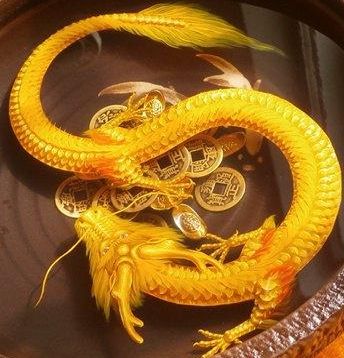 Year 2000 is a Chinese Golden Dragon Year. Where does the Golden Dragon name come from? Chinese calendar uses the Stem-Branch system to count the day, month and year. There are 10 Stems and 12 Branches in the system. Stems are named by the Yin-Yang and Five Elements (Metal, Water, Wood, Fire and Earth). The Stem sequence order is

Wooden Rat and end with

Water Pig. You can see the entire sequence from the Chinese New Year's page. From Year 1924 to Year 1983 is a complete cycle. Year 2000 is Yang Metal Dragon, the 17th of the Stem-Branch in the system. The Chinese use the same Chinese character for Gold and Metal, and as Gold sounds more valuable, the Chinese like to call year 2000 the Golden Dragon rather than the Metal Dragon. Year 2000 is also called the White Dragon, because Metal is equivalent to White in the Five Elements system. 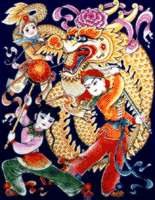 The Year 2000 (Golden Dragon) is the 4697th Chinese year. The Chinese believe that the first king of China was the Yellow King (he was not the first emperor of China who completed the Great Wall). The Yellow King became king in 2697 B.C., therefore China will enter the 4697th year on February 5th. 2000. Also, the Chinese Year uses the cycle of 60 Stem-Branch counting systems and the Golden Dragon is the 17th Stem-Branch in the cycle. Since 4697 = (60 *78) + 17, therefore this Golden Dragon Year is the 4697th Chinese Year.

Some websites say the year 2000 is the 4698th Chinese year. If you cannot find the explanation from there, here is a possible answer for you. Yellow King's inauguration was held in the spring of 2697 B.C. But the calendar of Yellow King used the winter solstice day as the first day of the year. So the first winter solstice was around December 23rd. 2698 B.C. Today's January 1st means nothing to Yellow King. If we count that extra eight days in 2698 B.C. for a year, the year 2000 is the 4698th Chinese year.

If you want to know if you are lucky or not in the year 2000, you must know your lucky element from the Chinese Fortune-Telling Calendar page first.

If your lucky element is Metal and need Metal to balance your Five Elements weight, you will do good in year 2000. Because Dragon contains the three elements Earth, Water, and Wood, it is considered as wet soil, which is the supporting element of Metal. When Stem is Metal and Branch is the supporting element of Metal, the force of Metal increases. With a powerful Metal force available, the person who needs help from Metal will be very lucky in the year 2000.

Because 60% of Dragon is Earth, if your lucky element is the Earth, you will be lucky too.

If your lucky element is Wood, you will have some luck in the Year 2000.

Dragon has a nickname Water Dam. That means Water never runs dry. If your lucky element is Water, you will have some luck too. And, if you can find Monkey and Rat in your birth chart and major decade cycle, it will be a very good year for you. Because when Monkey, Rat, and Dragon are together, they create a very powerful force of Water. However, it will be a bad year for you if Water is your unlucky element and Monkey, Rat, and Dragon are found together.

If your lucky element is Fire, you won't have too much luck in the year 2000.

These are the general hints for the prediction of your luck in the year 2000. if you need more detail, study Stem Relationship and Branch Relationship pages or ask a professional fortune-teller for your fortune.

Some people think Double Dragons (one dragon in birth chart, one in year 2000) is a bad sign for their luck. This is because the Chinese dragon is unpredictable, untouchable and we cannot see its head and tail at the same time. A person with too many dragons is unpredictable too and becomes somewhat sly. That's why some people worry about Double Dragons. However, there is no such rule in the Five Elements theory. A person with too many dragons simply means the person likes a stable environment and doesn't like to move. There is too much Earth (Soil) in the birth chart and the characteristic of Earth is stillness. A person with a lot of Earth in his Five Elements keeps his promises as it is hard for him to break his word. This type of person with Double Dragons tends to blame themselves when something goes wrong around them.

Find the Date of Chinese Festivals

The Essence of Chinese Calendar