Five Elements and Five Planets in the Solar System 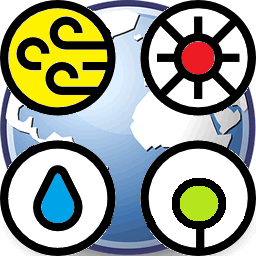 planets in the solar system

. The character of calendar's Day is 日, too. The Day is the counting time of the Sun passing the sky because of the self-rotation of the Earth. Therefore we can put the Sun on the top of the Day Column of the astrology birth chart. Chinese Astrology is the application of Yin Yang. Yang is male and Yin is female. The heaven (Sky) and the top are Yang. The ground and bottom are Yin. Therefore, the Sun is Yang and the Earth is Yin. The Sun is on the top of the Earth. We can put the Earth under the Sun.

. The character of calendar's Month is 月, too, because Month is the cycle of the Moon. The Moon is close the Earth. Therefore, we can put the Moon next to the Earth in the Month Column.

Mars is next to the Moon. We can put Mars, the Star of Fire , in the Year Column. Jupiter is next to Mars. We can put Jupiter, the Star of Wood , on the top to Mars. Jupiter is far away from the Sun. It takes 12 Earth years to make one trip around the Sun. That means one year on Jupiter is 12 years on earth. Ancient Chinese Five Star Calendar uses Jupiter to measure the year. The Chinese character of the Year is 年 Nian. Before the Chou Dynasty (1122 B.C.), Chinese used 歲 Sui for Year. Once Chinese astronomers treated Jupiter as the Start of 歲 Sui. Therefore to assign Jupiter on the Year Column should be correct.

The Chinese character of the Hour is 時, which combines day 日 and temple 寺. Ancient Chinese temple announced the clock time by hitting the temple bell. Venus is next to Earth. We put Venus, the Star of Metal , in the Hour column. Chinese called Mercury 辰 Chen, which is the unit of hours in Chinese. Mercury is next to Venus. We put Mercury, the Star of Water , on the top of Hour Column. In this way, Mercury is also close to the Sun.

The sequence of the planets in the solar system is from the Sun, Mercury, Venus, the Earth, Mars, Jupiter to Saturn. The Sun can be treated as yang, king, father, bright, heaven or sky. Saturn can be treated as yin, queen, mother, dark, hell or ground. Five planets, Jupiter, Mars, the Earth, Venus, and Mercury are in between the Sun and Saturn. Five planets have the Mother-and-Child relationship next to each other. 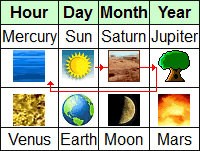 The Fire of the Sun is the mother element of Earth of Saturn. The planets of Uranus and Neptune are behind the Saturn. The color of Uranus and Neptune are pale blue. They are in the Water group. That implies Saturn contains invisible Water. A Tree (Wood) needs Water and Earth to grow. Saturn contains the mother element of Wood of Jupiter. The major five planets of the solar system allocated in the Chinese astrology birth chart are in a harmony mode of Five Elements.

Wood (plants) and human beings have a similar life cycle, which is connected to four seasons. Five Elements have a relationship with seasons too. Wood, Fire, Earth, Metal, and Water connected to spring, summer, season changes, autumn, and winter respectively. Plants grow leaves in the green spring and bloom in the hot summer. Dry autumn is the harvest season and cold winter is the withering period. The spring and summer are growing period. Autumn and winter are connected to old age.

The Year Column of the Chinese astrology birth chart contains Wood of Jupiter and Fire of Mars. Therefore, the Year Column has a connection with people's early years. The Hour Column of the birth chart contains the Metal of Venus and Water of Mercury. Therefore, the Hour Column has a connection with people's late years.

The periods in-between season changings are connected to Earth. Earth and Saturn are in the Earth group. They are in the center of the birth chart. The positions of five planets in the Chinese astrology birth chart fits the life cycle of living beings.

The Palace of a Kingdom and Astrology Birth Chart

All Chinese imperial palaces face the south. The chair of the emperor is on the north side of the main meeting hall. The Sun represents the emperor. The Saturn, the queen, should sit next to the emperor. The left-handed side of the emperor is toward the east. Jupiter is there. The Wood of Jupiter is connected to kindness in the Five Elements. Jupiter can represent the civil officer. Mars is next and under Jupiter. The Wood of Jupiter can help Fire of Mars to burn. Fire is connected to civilization. Jupiter helps to develop culture and civilization.

The Sun and Human Beings

All emperors of Chinese dynasties educated Chinese people that the emperor owned the nation was God willing. The emperor is the son of heaven. The Sun represents the emperor and the Earth represents the people in the birth chart. The emperor and people are human beings. The Earth and the Sun should have some relationships inside their ingredients. The following chart the ingredients of the Sun, the Moon, the Earth, the big five planets and human beings.

We can see the ingredient percentages of Hydrogen and Helium in the Sun and human are very close. The Sun and humans contain similar DNA. According to medical research, the sunshine can heal many human diseases. Especially, sunshine of the sunrise and sunset can activate people's longevity genes. Sun and humans have a cosmic connection.

Five Elements in the Zodiacs